It started nearly six months ago in Hyderabad. It traveled through eight Indian cities for the school phase, and then back to the eight for more in the college phase, oversaw the participation of 320 school and college teams from across the country, and featured thousands of young Indian men and women competing passionately to be the last one's standing.

And finally, over the past week, as the champions of each of the Indian cities in both the school and college divisions and in both men and women sections got together in New Delhi for the National Finals, the best of the best rose to the top to life the National trophies. 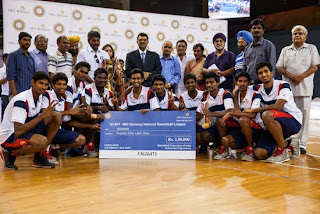 On Sunday, the last day of the 1st BFI-IMG Reliance National School/College Basketball League for Boys and Girls, school teams from Ludhiana and college squads from Chennai emerged as champions after five entertaining days of basketball at the Thyagaraj Indoor Stadium in New Delhi. The final champions were:

The national championship featured a total of 32 teams, all of whom were the winners of their respective cities' school (girls), school (boys), college (women), or college (men) championships. The team's were chosen after five months of games in the largest-ever iteration of the BFI-IMG Reliance School or College leagues, held in a record eight Indian cities: Hyderabad, New Delhi, Mumbai, Chennai, Ludhiana, Indore, Kolkata, and Bangalore. This was the first ever national tournament and it tipped off on April 30th.

In the School (Girls) final on Sunday, Ludhiana's Government Girls School survived a close game and a late charge by St. Joseph's (Chennai) behind 20 points by Samriti 24 and 20 from Gagandeep. It took an important third quarter run for the Ludhiana side to pull away from their competition. Devi had a game-high 27 in a losing effort for St. Joseph's. 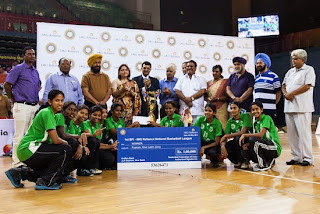 Gurvinder Singh Gill of Nav Bharti (Ludhiana) and Rohon from Fr. Agnel School (Mumbai) faced off in an epic shootout in the School (Boys) Final for the title. Gurvinder outscored Rohon 39-37, and his squad pulled away after a tight contest in the final period to win 97-85. Love Neet Atwal added 26 for the winning side. For Fr. Agnel, Tanmay added 16.

The College (Women) final also featured a great individual battle. Gomathi of MOP Vaishnav College (Chennai) and Simonelle from SBM Jain College (Mumbai) were both determined to lead their respective squads to victory. In a thrilling contest where both sides remained locked neck to neck till the very end, it was finally a clutch free-throw by MOP's captain Diviya that proved to be the difference that gave her side the close 74-73 win. Gomathi finished with 37 big points while her teammate Akshaya added 18. For SBM, Simonelle had a team-high 33 while Sindhuri chipped in with 16.

The last final was also the day's closest matchup. The star-studded Jeppiar Institute (Chennai) and Government College (Ludhiana) played in a classic back-and-forth game that revealed the best of the players' characters. After going 10 points down in the first quarter, Jeppiar bounced back to take a lead at halftime. Government College stuck with them the whole way however, and when the final buzzer sounded, neither team was ready to give in as the score remained tied at 74 each. On to overtime they went, and it finally took some clutch shots from the field and the line by Jeppiar's Arun Hari (28 points) which proved to be the difference as his side survived for an 88-85 win. Shashank added 24 for Jeppiar. Government College's loss wasted a couple of monster nights by talented big man Palpreet Singh (42 points) and Harmandeep (31). 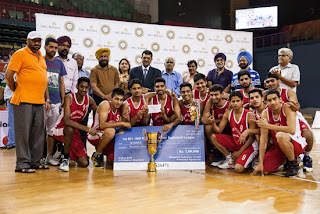 In the third/fourth place match, Madhu Kumari scored 34 points and Ananya S. added 17 as Modern School (Delhi) bounced back from a first quarter deficit Bishop Cotton High School (Bangalore) 65-61 in the School (Girls) Final. A Delhi side also won the boys game, as Oxford School were paced by the duo of Saurav (24) and Abhishek (23) to take an early lead over Bhavari's Prominent (Indore) and run away to a 85-71 win. Laxman scored a game-high 39 points in the loss for Bhavari's.

In the College (Women) third/fourth place game, Government College (Ludhiana) easily dismantled Renaissance College (Indore) for a 72-33 victory, in a game which included a dominating 24-3 third quarter in favour of the Ludhiana side. The Men's game was a high-scoring affair where SBM Jain College (Bangalore) were led by Vinoth (31), Visu (22) and Kaif (17) to defeat Kirori Mal College (Delhi) 98-85. Harish (31) and Aditya (22) led the way in scoring for the Delhi unit. 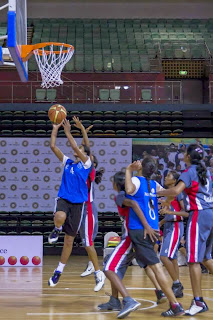 All photos via Basketball Federation of India. Click here to see comprehensive Final results from the championship via the BFI.
Posted by KARAN MADHOK at 12:29