Notes: I attended the NBA Yao School in Beijing


A few months ago, SLAM Magazine published an interview I did with former NBA great Yao Ming, the greatest basketball player to ever come out of Asia and still the most respected and powerful man in Chinese Basketball. While the majority of our discussion was a fond look back at Yao's short-yet-effective NBA career and his legacy, Yao was definitely keen to also promote his newest venture in China with the outside world. Earlier this year, he launched the first season of the NBA Yao School in Beijing, a programme to offer after-school and weekend basketball training and fitness programmes for children of a varied age group and at all skill levels. 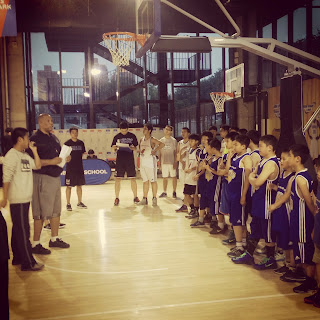 The 'school' has been in session since February at the Wukesong Basketball Park in Beijing, led by basketball operations heads and coaches appointed by the NBA. Children from ages 6-16 have signed up and now, the first season of the programme is in its tailend as the final days approach towards the end of May.

On Friday (May 9th), I finally got a chance to attend one of the sessions of the NBA Yao School in person to watch the basketball teaching in action. It was the 11th session of its first season. The coaches leading the session were Billy Singelton (former British Basketball League legend) and Greg Stolt (Associate Vice President of Basketball Operations - NBA China and basketball world traveler!).

Children participating in the NBA Yao School have been divided into four age groups: 6-9, 10-12, 13-14, and 15-16. At this point, the school only had male students. The NBA handed the children jerseys or T-shirts representing the Rockets, Knicks, Spurs, and Heat. For the sessions, the Wukesong Basketball Park has been designed to give a mini NBA experience, with banners of several NBA teams on hanging from the rafters and life-size shots of some of the league's biggest superstars like Russell Westbrook, Dwight Howard, or Derrick Rose plastered on the wall behind the basket. 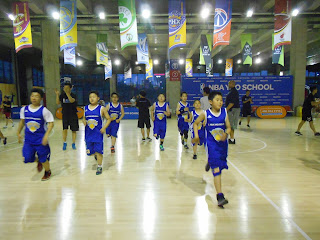 Watching the camp and sessions in action, I was reminded of the interview and conversation I had about the school with Yao months ago. Yao told me of his intentions to encourage Chinese youngsters outside of the classroom and on to the playground. "The education system [in China] has been focused only on academics," said Yao, "I feel that sports are equally important. Sports can provide a social experience before a child steps into the real world. The idea was for an after-school program where kids can relax their minds from school and have a chance to learn to become a team member. Concepts like teamwork, communication, cooperation or leadership can’t just be learned from paper; you have to experience them. And that’s what Yao School is here for. Basketball skills are the strategy to put that experience together."

"This is character education," he added, "For years, kids in China have been isolated. Isolated at home, because of the one-child policy, and in school, where everyone is worried about [grades]. I want to take them out of that element and give them a chance to play as a group. A future career cannot be done in isolation; you have to work with somebody."

From one sense, I could see that Yao's concern of 'isolation' that many of these youngsters might have without siblings was definitely addressed at the session - in action, not in words. With so many peers of their age group around them, it was heartening to see the kids - especially the youngest ones - interacting and having fun with others of their age and with the common interest in basketball. It made me a little jealous too: there could have been so many life lessons such as communication, leadership, or teamwork that I would've learnt much better had they been taught through basketball, instead of through a boring old teacher in a classroom. 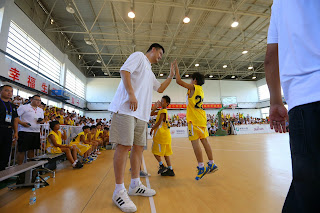 Singleton's aim wasn't just to teach the kids on-court skills; he started off the session by tackling basketball philosophies, and on the 11th session, the message was an encouraging call to spend more time at practice. "No substitute for hard work," he said. A little bit of English basketball termanology was taught, too, and translated into Mandarin; phrases such as "post up" or "6th Man".

Fridays are the only days when all the age levels come to train together, but after the pre-game workouts, they are all divided into their groups to focus on various different skill-set training. On this day, Singleton started with the youngest group, who are still only at the age where the training is still mostly concerned with fitness more than specific basketball skills. Stolt worked with some of the older kids on defensive drills first before moving on to other activities.

China loves basketball. This is no secret, as the sport is probably a favourite in the country with the world's largest population, and has especially been on the upswing ever since Yao was drafted # 1 in the 2001 NBA draft and went on to enjoy a multiple-time All Star career. But post-Yao there has been no one from the country to fill his void - on and off the court. China has been searching for a replacement ever since, but it is near-impossible to emulate a star of Yao's physical stature and skills. Yao had made it clear that his school won't be specifically looking to groom the next star player (or the next him); instead, the focus will be on the majority of kids who are being encouraged to take up the sport as a serious hobby, if not necessarily a profession.

In the coming weeks, there will be a few more similar sessions for the first batch of NBA Yao School students, before this year's schedule concludes at the end of this month. Yao, who has occasionally attended and given advice himself, will be in Beijing for the finale. If this year is considered a success, Yao had mentioned that he will be hoping to expand the school to several other cities in China - starting with his hometown Shanghai - and help the philosophies and on-court training reach out to many more kids around the country.