14 Men's teams and 12 Women's teams will make up for large contingent of competitors who are set to take part in the 57th Kerala State Basketball Championship in the city of Manjeri in Malappuram District, Kerala, from December 4-9, 2012. The championship, which is being held at the Govt. Boys Higher Secondary School in the city, is being organised by the Kerala Basketball Association under the auspices of Malappuram District Basketball Association.

The tournament is being held in preparation for India's Senior National Basketball Championship, slated to held in Ludhiana, Punjab, in the end of December. Kerala's team for the Senior Nationals will be chosen based on their performance at this tournament. 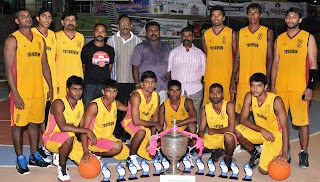 This 6 day Championship will features 47 matches, which are scheduled to be played on a league and knockout basis.

A ‘Referees Clinic’ will be set up to familiarise the players with the newly implemented laws for the championship. International Referee Fr. Philips Vadakeekalam, Chairman of Technical Commission (Kerala), will lead the clinic on the venue from 1 PM on December 4th the opening day. This will be followed by a test for aspiring Referees on 6th December.

Thiruvanathapuram (Men) and Kannur (Women) are the defending Champions of this tournament. India's international stars Basil Phillip, Eudrick Perreira, and Jeena PS can be expected to take part in the championship.

Women
Posted by KARAN MADHOK at 18:46