As India’s biggest basketball competition tipped off in New Delhi, the question in the minds of Indian players and fans was simple: How soon before we take the step into the next level? 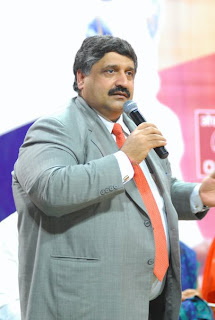 But as far as Harish Sharma, the Secretary-General of the Basketball Federation of India (BFI) is concerned, that leap has already been achieved.

“Basketball as a sport is all set to conquer India,” Sharma says, “The sport has always been an integral part of the school life of Indian kids, but now, as the running of the federation becomes more and more professional, the sky is the limit for this sport.”

Winds of change arrived for the BFI this year as the federation signed a sponsorship contract with the IMG-Reliance group, who have since been sponsoring national tournaments, inner-city leagues, and providing scholarship to young Indian basketball players to hone their skills at the IMG Academy in Floriday, USA. The deal lasts a full 30 years, providing enough time for the federation to oversee the growth of the game in the country.

“Our priority is the players,” says Sharma, “We are now ready to provide India’s best players extra incentive in terms of bonus payment so that they remain motivated to keep trying harder for the country. We will be dividing the players in three groups, based on their skill level. We will focus equally on men and women – basketball in India is a gender-friendly sport!"

India has already started to see the results of this new focus on the national basketball teams. For the first time in 28 years, Indian men and women participated in the Asian Games basketball tournament, held at Guangzhou, China. The Indian men’s team made further history after winning their first ever Asian Games contest, against Afghanistan.

Another way to make sure that the teams are well led into such tournaments is to get the finest teachers of the sport in India. For the first time for the Asian Games, two American coaches, for the men’s and women’s teams respectively, led the squad. The Men’s team were led by former NCAA D3 coach Bill Harris and the women’s team by former WNBA player Tamika Raymond. Sharma reiterated that India will continue to look for coaching talent overseas and bring the best coaches from around the world to coach India.

“It has been a historic year for the BFI and basketball, “said Sharma, “Now, we are excited to bring the most talented Indian players and teams to Delhi so that they can perform at the biggest stage – the National Championships. Basketball is a sport that can easily become extremely popular in India, and we are hoping that this tournament will help encourage more youngsters to take part in the sport.”
Posted by KARAN MADHOK at 19:29