It took a thrilling overtime battle, but heroics, experience, and sheer will for success helped the University of Calicut state their claim to an incredible three-peat at India's most prestigious national women's collegiate title - the 2018 All India Inter University Women's Basketball Championship for Women - in Chennai on Tuesday. Calicut defeated Bharathiar University in the final to win the gold medal at Chennai's Sri Sai Ram Engineering College. 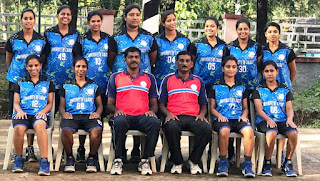 University of Calicut, from Malappuram in Kerala, faced a tough opponent against Coimbatore (Tamil Nadu) based Bharathiar University. Bharathiar led 21-12 in the first quarter, but Calicut made a strong comeback to reverse the scores by the end of the fourth period to lead 61-52. Bharathiar equaled the scores at 84 at the end of regulation, but the tall duo of Elizabeth Hilarious (21) and Mayuka R. (18) rose to the occasion in overtime to hand Calicut the close 91-90 victory. Keerthi (31), Shreyanka (24), and Surya Dhaarshini (17) led the way for Bharathiar in the loss.

MG University from Kottayam (Kerala) won the bronze medal for the second consecutive year over Kannur with a 59-40 victory, led by Rose Mary (17).
Posted by KARAN MADHOK at 10:18