A couple of rivalries - some old, some new - were reignited at the biggest stage in domestic Indian basketball during the finals of the 2018 Senior National Basketball Championship for Men and Women at the Jawaharlal Nehru Stadium in Chennai on Wednesday. The tournament, featuring the finest teams and players in the country, came to a conclusion with big victories for Indian Railways (Women) and hosts Tamil Nadu (Men), both of whom lifted championship trophies with victories over Chhattisgarh and Services respectively. 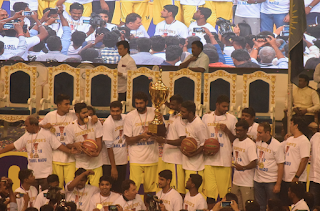 The 'Senior Nationals', organised by the Tamil Nadu Basketball Association (TNBA) and the Basketball Federation of India (BFI), are India's most prestigious basketball championship. This year the 68th edition of tournament featured the best basketball talent from 31 men's and 26 women's teams from Indian States and Union territories.

For a major stretch in the past decade, Indian Railways were nearly untouchable at the Senior Nationals, seemingly winning the tournament every year. Their reign at the top was finally stopped by Chhattisgarh who beat Railways in the 2014 finals and sowed the seeds of a new rivalry. The two teams squared off at the final once again on Wednesday, and Railways made their intention to rise back to the top clear from the beginning. Railways led 43-33 at halftime, and then raced off in the second half to a comfortable 100-71 victory on the back of captain Navaneetha PU (30) and Renjini (19). Poonjam Chaturvedi, India's tallest women's basketball player, scored 27 for Chhattisgarh in the loss, while Anju Lakra scored 17 against her former team.

The Men's final was a closer affair, pitting the well-prepared host team Tamil Nadu against the old heads from Services. Under the tutelage of Serbian coach Milan Opacic, expectations were high for TN to defend their home court. The teams went back and forth in the first half and TN held only a slim 41-40 lead at halftime. After the break, however, TN's finally began to create some separation against their gritty opponents and pulled away to win 94-86. International forward Rikin Pethani scored 25 for the winning side and Justin added 16. The veteran duo of Joginder Singh (23) and Narender Grewal (20) led Services in the loss. 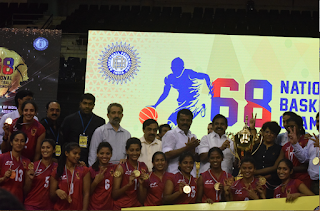