India's largest collegiate level basketball tournament - the UBAU All India Inter-Zonal University Basketball Championship for Men 2017 - came to a conclusion in Chandigarh on Tuesday February 21 with Patiala's Punjabi University cruising to an easy victory in the final over Anna University (Chennai). This victory was especially significant to Punjabi University since they weren't even in the top sixteen of the inter-zonal championship last year. 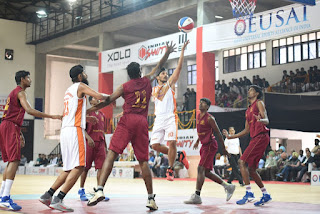 This prestigious Association of Indian Universities (AIU) Championship was organised by Universal Basketball Alliance India Pvt Ltd. The top four teams from each zone - North, South, East, and West - qualify to the inter-zonal championship and are divided into four pools of four teams each. The top two teams from each pool after the league stages qualify to the knockout rounds: quarterfinals, semis, followed by the finals.

Anna had tasted defeat at the final stage of this tournament at the hands of last year's host team Mumbai University. With Punjabi University making the short distance from Patiala to Chandigarh for the tournament, Anna once again faced a team being treated as hosts in the final at the indoor stadium in Sector-42. Behind the efforts of Gurdit Singh (23) and Abhi Kumar (16), Punjabi took a comfortable 41-29 lead at halftime and turned the game into a blowout with a 23-point lead at the end of the third quarter. At the final buzzer, Punjabi University sealed the title victory with a 78-54 rout.

Earlier that evening, New Delhi's Jamia Millia Islamia University were led by an explosive 47-point performance by Bhupender to defeat another Chennai team - the University of Madras - 90-62 and secure third-place at the tournament. Abhudaya scored 16 for Jamia, while Madras were led by Karthik's 18 points. 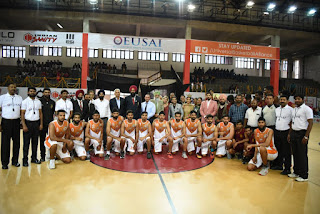 The final 16 teams that participated in the UBAU All India Inter-Zonal University Basketball Championship this year were (several University sent 'A' and 'B' squads: