It was a day of Finals rematches, and a chance at repeat or redemption. The 64th Junior National Basketball Championship for Under-18 Boys and Girls - held at Kochi (Kerala) from May 26th to June 2nd - came down to a double rematch in both the divisions from last year's Finals. In front of loud fans showing their support for the game on Monday evening at Kochi's Rajiv Gandhi Indoor Stadium, Chhattisgarh defended the girls' title with a second consecutive Final victory over hosts Kerala. Punjab's Boys redeemed themselves after last year's loss in Cuttack to snatch the title over Delhi with a win in the Boys' finale. 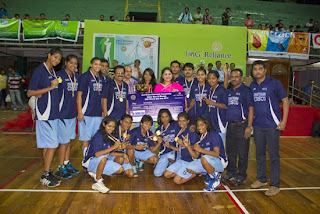 The 'Junior Nationals' were organized by the Kerala Basketball Association (KBA) under the auspices of the Basketball Federation of India (BFI). The week-long tournament entertained 24 boys' and 23 girls' teams from across India competing for the title.

But, as the dust settled, the finalists were once again familiar faces from a year ago. After losing two league games earlier in the tournament, Punjab Boys gained momentum to storm in their into the final for a rematch against last year's champs, Delhi. Playing with flair and athleticism, Punjab took a double-digit lead in the first half and never looked back, holding on to their advantage en route to a 83-71 win. Arshpreet Singh (21) and Anmol Singh (16) carried the scoring load for the winners, while Delhi's guard Sunil scored 25 points in a losing effort.

The girls' final was also a repeat from 2013, featuring the host team Kerala and reigning champions Chhattisgarh. Despite facing a hostile crowd egging up the host side and trailing in the first quarter, Chhattisgarh stayed composed to craft a comeback with a dominant performance the rest of the way. Led by MVP Sharanjeet Kaur (28 points in the Final) and Riya Verma (24) Chhattisgarh took the lead and stretched it to double digits by the end of the game for a 79-66 victory. Kerala's missed the services of prodigious young star Poojamol KS in the final, who suffered a leg injury earlier in the league rounds. Arathi Vimal led the way with 17 points for the hosts. 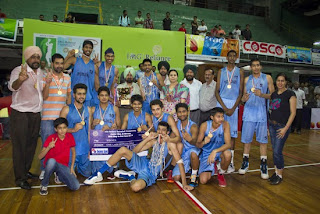 Punjab's Arshpreet Singh (Boys) and Chhattisgarh's Sharanjeet Kaur (Girls) were handed the Harish Sharma Most Valuable Player Awards at the end of the tournament.

The bronze-medal games were also held earlier in Monday. In the Boys' game, Harish (31) and Muin Bek (22) helped Tamil Nadu defeat Maharashtra 83-80 in a thrilling encounter. Sandhu Sanson scored 21 while Harshal Parab added 18 for the losing side. Uttar Pradesh's girls continued their fairytale run in the tournament behind 20 points by Barkha Sonkar to defeat Punjab 73-39 in their bronze medal encounter. Sakshi Sharma added 17 for UP while Samriti with 20 was the leading scorer for the losing side. 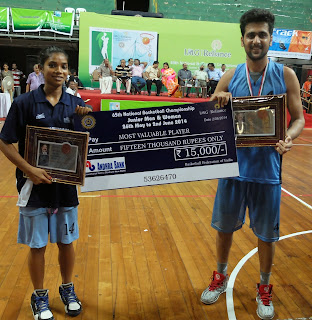 In the Semi-Final stage a day earlier, Delhi outlasted Maharashtra in a high-scoring encounter in the boys' division with a 91-79 win. Hemant Hooda (24) and Sunil (20) were the high scorers for Delhi, while Maharashtra featured top performances by Ashraf Siddique (18) and Parab Harshal (17). In the second boys's semi-final, Punjab blew out Tamil Nadu early behind a captivating 31-point night by Gurvinder Singh Gill. Arshpreet Singh added 18 for Punjab in the win.

Eventual girls' champs Chhattisgarh ended Uttar Pradesh's hopes for a miracle upset with a 105-53 thumping. Behind the unstoppable duo of Sangeeta Kaur (32) and Sharanjeet Kaur (29), Chhattisgarh led the whole way for the easy victory. Barkha Sonkar finished with 27 points for UP in the loss. In the second semi-final between Kerala and Punjab, Elizabeth Hilarious (23) and Arathi Vimal (16) were too much to handle in 64-53 win for Kerala. Punjab's top scorer was Gagandeep Kaur, who had 28 points in a valiant losing effort. 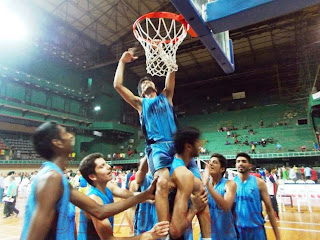