Klay Thompson: The Language of Swish


This feature was first published in the 109th edition (2013 - No. 12) of SLAM China Magazine. Here is my original English version of the story. 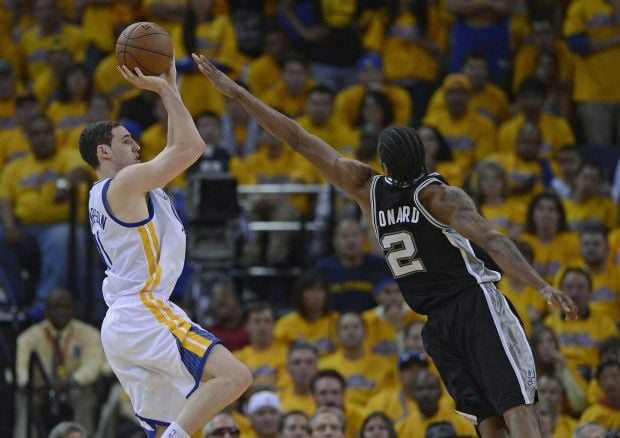 Klay Thompson moved his elbow up to a shooting position, making an ‘L’ shape with his hands, and then let his wrists throw the imaginary ball into an imaginary hoop. “Just like that,” he instructed the rows of eager teens seated ahead of him, “Let your hand form this motion. My father taught me: your shooting hand should look like you’re reaching high for the cookie jar.”

There was a brief moment of silence, and then his translator picked up those words and began to convert them in Chinese for the audience. Thompson turned to his side while the translator talked and showed the shooting form again. A perfect ‘L’. And the wrist dropping into the cookie jar.

Thompson couldn’t speak a word of Chinese. And the basketball-loving teenagers at the ‘Klay Thompson Fan Day’ in Beijing struggled with their English. And yet, they didn’t have to wait for the translator to understand. With a simple gesture of the hands and a flick of the wrist, he had gotten his point across.

This is how you shoot a perfect jump-shot. And it sounds like a “swish” in every language.

Thompson’s been accustomed to that sound now. The 23-year-old exploded to the scene in his second season in the NBA as one of the most dangerous shooters in the league. After just starting 29 games in his rookie year, Thompson was in Golden State’s starting five for all 82 contests in 2012-13 and averaged 16.6 points per contest. And then, he became part of a magical playoffs run for the Warriors as the lower-seeded team upset the Denver Nuggets and battled the heavily-favoured Spurs to Game 6. It was in this series that one of Golden State’s two wins came courtesy of Thompson’s career-best night, when he scored a career-high 34 points on 8-9 shooting from beyond the three-point arc, and added a career-high 14 rebounds. 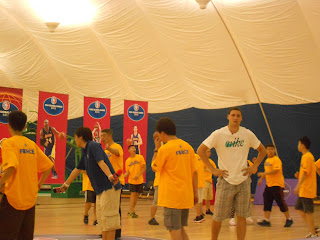 About a month and a half after his heroics – and the Warriors’ subsequent playoff loss – Thompson found himself breaking a sweat on the basketball court for the first time since he played the Spurs. The competition and the stage were distinctly different, of course. He was playing a casual one-on-one game with a Chinese media personality in a quiet hall on the East side of Beijing.

But within moments, every court in every city and every opponent in the world morphed into the same thing. Because the sound of the “swish” was still the same.

Understandably, it was Thompson’s potent jump-shot that was the center of attraction at this shooting clinic at Beijing. And Thompson obliged the young learners with tips on how to perfect that jumper, both through the body and the mind.

“Physically, you have to practice hard to improve the shot, and make sure to spend enough hours in the gym,” he instructed, “But you have to have mental confidence too. You have to have ultimate belief in yourself that you are the best shooter, that even if you’ve missed 10 in a row, you will be able to make the next 20.”

Thompson’s range has come into even extra scrutiny because of the changing circumstances around the league and the increasing reliance on three-point shot for success. In the NBA Finals, Danny Green made waves by breaking the record for most threes made in a Finals. The Miami Heat – with Ray Allen, Norris Cole, Mike Miller, Shane Battier, and more – became a dangerous crew from beyond the arc as well. The New York Knicks enjoyed a wealth of success this season because of their three-point accuracy. And how can we forget Thompson’s own teammate Stephen Curry, who is well on his way to becoming one of the greatest three-point shooters of all time. (“He’s the best shooter I’ve ever seen,” Thompson says of Curry.)

In that case, Klay Thompson is the future of the league, too.

Thompson visited China in mid June, travelling to Xian, Beijing, and Chengdu, to promote the NBA Global Games 2013. He will be back in Beijing and Shanghai in October, along with Curry and the rest of his Warriors’ teammates, to take part in ‘China Games’, two pre-season NBA games held in China against the world famous Los Angeles Lakers. Even though they are technically just ‘exhibition’ games, Thompson believes that he will be ready to response to the playoff-type atmosphere at these contests.

“Whenever the crowd is like that, you wanna give them a show. Both of our teams are really competitive. It’s fun to play in front of fans who are rowdy and who love the game, and that’s what we’ll see in these two exhibition games in Beijing and Shanghai. I’m really excited for them, and my teammates will be too.” 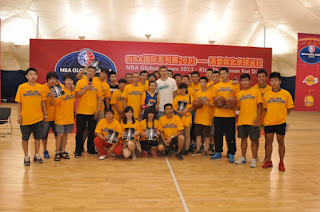 Looking ahead, Thompson also feels that he and his team will be motivated to come back stronger after their memorable run this season.

“If we don’t go past the second round next season I feel it will be a disappointment,” he said, “We have a bright future. As long as we keep our core together and keep working hard, I think we can win championships in the near future.”

Speaking on his own goals for next season, Thompson added: “I wanna be a better pick and roll player and better at finishing around the rim. And keep working on the defensive end as well – people forget that the game is 50 percent defense. I think I can be an All Defensive player in this league. It’s gonna take a lot of work, but I think that I can get there. I took big strides in that area last summer. I don’t wanna be known for just my shooting. I wanna be known as a good defender, a good passer, and hopefully I can add one new element to my game every year. Hopefully next year I can also be a better play-maker than I was this last year.”

His angst for improvement is understandable. No man wants to be pigeon-holed into one box. Klay Thompson has an arsenal of different, improving talents, and he’s making it clear that he wants to make considerable improvements in all of them.

Shooting is still his calling card though, and it was still the major reason why fans gasp when they see him catch fire and when youngsters listen when he teaches them how to emulate his form. It is that shooting form that breaks barriers of language and culture and gets the point across. From the perfect release to the perfect “swish.”
Posted by KARAN MADHOK at 10:21