FIBA Asia Press Release Hagop Khajirian will take over the post of the FIBA Secretary General following his unanimous election to that post at the FIBA Asia Central Board meeting on Friday after Dato’ Yeoh Choo Hock the current FIBA Asia Secretary General relinquished his post due to health reasons. 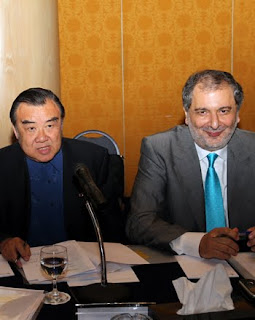 The FIBA Asia Central Board thanked Dato’ Yeoh for long and enduring years of service to FIBA Asia and noted that he will always be the inspiration for future basketball administrators.

“Dato Yeoh’s contribution to basketball came at a time when the sport was taking its initial steps. Therefore the amount of sacrifice he has made for the sport is unmatchable,” noted FIBA Asia President Sheikh Saud Ali Thani.

Khajirian went on to become a FIBA Asia Executive Committee member when he became the Deputy Secretary General in 2002 and has held the post till then.

Under Khajirian’s leadership, WABA as a FIBA Asia sub-zone took giant strides with at least one team from WABA figuring in the semifinals of all the last seven FIBA Asia Championships.

Further, as the Chairman of the Marketing and Media Permanent Committee and as the Chief of Operations for all events, Khajirian has created an efficient and effective blueprint for all FIBA Asia events.

“It is a great responsibility and privilege to be elected to this post,” said Khajirian post his election.

“It’s an honor at the same time a challenge. I will be following the footsteps of Dato Yeoh to carry out my responsibilities. Dato Yeoh’s methods are excellent guidelines for all of us to follow,” he said.
Posted by KARAN MADHOK at 18:35