Peace, Freedom, and Basketball: A pick-up game in the Tibet-influenced city of Mcleodganj

Dhondup is wrapped inside a thin orange robe, much too thin to provide adequate cover from the chilly November temperatures of his Himalayan abode, but he is well acclimatized to the weather up here. He is short, stout Tibetan, with a shiny bald head and a shinier smile pasted across his face. Around his neck is a prayer mala, a garland of beads, which he tucks inside his robe. The robe barely reaches up to his ankles.

I watch from the sideline as he crouches down to one knee and laces up his kicks, an old pair of Nike Air Max Somethings. Around him stand a few others dressed just like him, in orange robes and sneakers, and other Tibetan youngsters in t-shirts and shorts, including one in an old Lakers No. 8.

I point over to Dhondup, “Can I join in?” I asked. 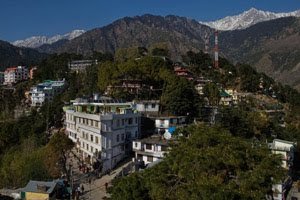 I nodded, took off my beanie and my jacket, shivered and jogged up to the huddle below the basket. Everyone introduces themselves to everyone else. And so began the single most surreal pick-up game of my life.

The place is Mcleodganj, a popular village tucked up 6,800 feet above sea level and amongst the clouds in the Himalayan range in North India. Apart from being a small, scenic hill-station, Mcleodganj is really only famous for one thing—it is the town in which the Dalai Lama chose to set up his permanent home and monastery, ever since he went into exile from Tibet 50 years ago.

He was then followed by many more Tibetans, so many so that Mcleodganj and its neighboring town of Dharamshala (in the Kangra district) resemble entirely Tibetan towns. The monasteries, the multi-colored prayer-flags, the monks and the Tibetan food and culture have earned Mcleodganj the nickname ‘Little Lhasaí,’ after the capital of the region of Tibet. 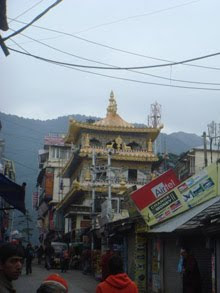 The ‘region,’ not the ‘country’—it is hardly possible to walk a few meters across the village without coming across Pro-Tibet posters, flyers or activists. The old hold prayers and peaceful demonstrations for Tibet’s freedom from mainland China, while the young passionately participate in public-awareness rallies and forums to fight for their fellow Tibetans back home in Tibet. The Tibetan Youth Congress (TYC) is one of the main committees set up at Mcleodganj, and Tibetan Government-in-Exile is based in Dharamshala nearby.

It is this mixture of peaceful Buddhist culture, a serene and scenic mountainous environment, and political fervor that attracts hordes of Buddhist pilgrims as well as foreign travelers and activists every year from all over the world. People from the USA, Great Britain, France, Canada, Italy, Australia, Belgium, Israel, and many other countries come together in this strange global village, where the days are spent hiking to the snow peaks of the Himalayas and the nights at rooftop cafes, singing along to Bob Marley tracks.

There is one other non-Tibetan face on the court that day—a tall American who I met a day earlier—and he is among the 12 of us who stand out on the cold cement court. I am anxious to shake off the cold winter chills and get started. When the teams are made, I am placed opposite Dhondup, a few other monks, and the American. The monks, all in their mid-30s, are the oldest of the lot. My team mostly comprised of the other Tibetan youngsters, most of who seemed to be in their early-20s.

Basketball? Rewind back a day: I was strolling through the local market-area and I came across a small store down a steep slope, lost amongst shops selling local handlooms, books and Buddhist prayer material. It was here that, among a slow, lost world, I came across an Iverson poster—back-in-the-day Iverson, sporting corn-rows and a white Sixers No. 3 and mean mug—and it was here that I suddenly believed that there are absolutely no limits to globalization. I stepped inside the shop which had Jordan posters, Kobe posters, T-Mac, Kobe and Shaq smiling together (like the old SLAM cover), Duncan, and KG, and GP and Shawn Kemp, and basketball stickers, and old cards, and fake Laker and Bulls hats, and lots, lots more! This was India, these were the Himalayas, this was Little Lhasa!

I called up my older brother straight away, half in humorous disbelief, half in genuine excitement. “Do they have a LeBron?” was his very first question, and we shared a laugh over the unlikelihood of it all. I was later to discover that this shop wasn’t alone—Mcleodganj had another small store a few minutes away that sold basketball sneakers, team-logo inspired sweat-shirts, and a few replica jerseys. The entire experience would’ve made the organizing staff of Basketball Without Borders gush. 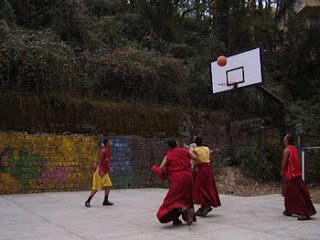 I ran into the tall American later that day, and between asking him where he was from (Boston) and him wondering what NBA team I supported (tragically, the Knicks), we began talking about the basketball culture in Mcleodganj, and he told me that he found a court where the monks came to play.

“Yeah, monks,” he said, “They live in the monastery, but they play at the court nearby every evening. They’re not bad!”

So the following evening I walked downhill from my guesthouse until I saw it. Perched above on a short hilltop and partly hidden behind tall trees, there stood the cement basketball court. I smiled and approached it, and that is where our story began.

“We play ball every day, in school, when we did our higher courses, after work,” says Jigme, one of the players on my team. His English is much better, courtesy of the interaction he has with foreign visitors in his little community. “It will be impossible to complete our day without a game—basketball and soccer are the most popular sports up here.”

Appearances can be deceptive. Dhondup, in his somber orange robe and priestly bald cut is the last person I expect to throw full-court bounce passes in a fast-paced game. Jigme, with his punk-spiked hair and oversized shorts turned out to be one of the most active members of the ‘Free Tibet’ public-awareness initiative. Mcleodganj, a sleepy, spiritual little village, is a boiling point of politics, global social interaction and basketball.

The game itself is jerky, stop-start, chaotic affair, as 12 of us try to fit in into a court three-fourths of regulation size. The monks, older, and definitely wiser, are the Stocktons on court—calculative, efficient and selfless. Dhondup racks up the assists and remains fundamentally sound. The younger players are much more ‘AND 1’ about things, throwing flashy no-look passes, adding extra pumps before each lay-up, and trying to Iverson-dribble their way through traffic.

When the game finished, we shook hands, exchanged laughs, and were away into our own separate realities. Dhondup and the monks returned to their monastery, and Jigme and some of the others returned to their lives, and the worries of Tibet and the Tibetan youth movement. The two groups symbolize the two-fold approach for freedom of the Tibetan people—the spiritual approach is peaceful, loving and revered, and the political one which is actively involved in global relations.

That day was in November 2008, barely three months since the end of the Beijing Olympics, and despite the human rights protests of the Tibetan people, the Chinese managed to host one of the most glamorous events known to man. The events reach their high point for all those in the basketball world when DWade, Kobe, LeBron and the others bring back the gold for the Americans.

But another, relatively economical event took place at Mcleodganj/Dharamshala earlier that year—the Tibetan Olympics 2008 were held on a small scale in the month of May. Dubbed as ‘The Other Olympics,’ the events included archery, long distance running, swimming and several track and field events. Although basketball wasn’t a scheduled event, the Tibetan’s Woman’s Association organized a basketball tournament on Mother’s Day (May 11) a few weeks prior to the Tibetan Olympics. The tournament was a success, highlighting the freedom to play for Tibetan woman as much as the game of basketball itself.

Jigme pulls me aside after the game. “You can see how this game gets all people together?” he asks. “Monks, tourists, activists, journalists—the game is like that. It brings us on one common platform.”

It is a game like that—playmakers, scorers, defenders, rebounders—and whether the platform is an undersized concrete court or a worldwide political movement, basketball is just one wheel that helps to run community relations up here in ‘Little Lhasa.’