Iran Men's team beat Korea 66-59 in the final of the 2011 William Jones Basketball Tournament at the Sinjhuang Stadium in Taipei (Chinese Taipei) on Sunday, August 14 to notch their third consecutive top place finish at the tournament. 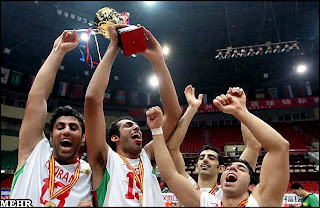 Iran finished the tournament with a 7-2 record. A dominating performance by Iran's superstar Hamed Ehadadi sealed the deal in the final game, as he scored 35 points and grabbed 18 rebounds. Korea took a three point lead in the first half, but a resurgent Iran performance after the break saw them overturn the score to win the tie. Jinzhou Cheng led Korea with 19 points.

Philippines won the third-place match-up against hosts Chinese Taipei, outmuscling their way to a 82-72 win on Sunday.

Iran had won the William Jones Cup in its last two editions. The women's competition, in which the Indian team participated, concluded 10 days ago with the host team Chinese Taipei finishing at first place.
Posted by KARAN MADHOK at 09:15