The 2019 FIBA Asia Champions Cup is a tournament that will involve the top club sides from all around the continent. From India, the competitor is determined by the previous winner of the Federation Cup, which was Punjab Police. But before the squad can step out for the main tournament and be a part of the 'Final 8', they will have to win the East Asia qualifying round in Bangkok, set to be held from August 13-15.

Punjab Police will take part in this qualifying round alongside SAFSA (Singapore), HiTech Bangkok City (Thailand), and Fubon Braves (Chinese Taipei). The teams will play in single-round robin format from August 13-15. The top two teams will claim their tickets to the FIBA Asia Champions Cup 2019 to join complete the cast of 8 elite professional basketball clubs in Asia. 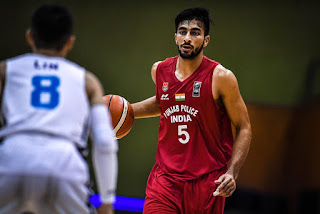 Punjab Police are missing one major star from their roster at this event: Amjyot Singh, who is currently playing in the 3x3BL in Punjab. The team lost their first game by 100-56 to Fubon Braves, and desperately need to notch wins in the next two contests to have a chance for the Final 8 of the FIBA Asia Champions Cup.