It was the second basketball trip this year for the Indian Bank side to Coimbatore. And for the second time, the journey ended with victory.

After securing the 54th Nachimuthu Gounder Cup in Coimbatore earlier this year, Indian Bank (Chennai) returned to the city in Tamil Nadu and bagged first place in the 2019 PSG Trophy on Tuesday, August 13 at the PSG Sports Club. The prestigious invitational basketball tournament was held between eight teams from around the country from August 9-13, 2019. 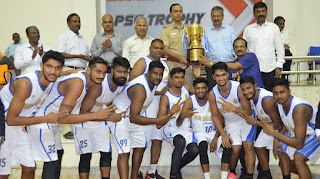 Indian Bank secured the title win a 79-61 victory over Indian Army (Delhi) in the final on Tuesday. Hari Ram of Indian Bank scored 29 points to lead his squad to the win.