OJ Mayo’s brief basketball career has taken more tumbles and more rises and falls than an oscillating sound wave. If you told a Mayo fan in 2007 that he would playing at an All Star level in the NBA in 2012, you wouldn’t be met with surprise. From earning comparisons to Kobe Bryant as a high-schooler to an underwhelming start to his NBA career before skyrocketing again… The surprise isn’t the destination where he is currently at, but the journey which he took to arrive at that destination.

Posted by KARAN MADHOK at 12:52 No comments:

The Basketball Federation of India (BFI) and IMG-Reliance have announced that they will launch the new season of the BFI-IMG Reliance School Basketball League in Chennai on Friday, November 23, 2012. 12 boys' teams and eight girls' teams are set to take part in the competition. Matches are slated to be held at T. Nagar and Nungambakkam courts in the city. 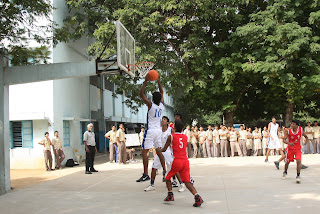 The preliminary round of the league will be held until November 27. The finals of the tournament will be on December 1.

This will the third year running of this school league in Chennai.

He is the perfectly constructed post-playing basketball machine.

But although the jokes may fly in comparing his lack of emotional response on court to a cyborg, Tim Duncan is machine-like in another, more crucial way. More than a decade and a half into this starry NBA career, he still dominates the post, still banks in those shots, still makes it tough for opposition to score on him, still puts up big stats and drops clutch games in the post season, and still keeps winning. He may be 36 years old, but Robots are ageless.

Posted by KARAN MADHOK at 12:22 No comments:

The FIBA Basketball World Cup gets bigger and better!

Posted by KARAN MADHOK at 15:01 No comments:

3x3 basketball - like it or not - is being sold aggressively, and a majority of different interested parties, from FIBA to the NBA to your neighbourhood tournament organisers, are hoping to see this format of the game grow. FIBA's dream is to see 3x3 Basketball become an Olympic sport by Rio 2016, and they've begun to hold FIBA 3x3 world championships in recent years. The NBA has gotten in the act by holding the NBA 3x tournament around the world, including the tournaments that were launched around India a few months ago. 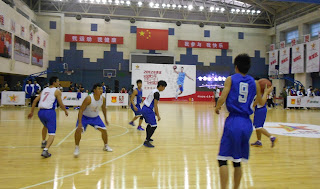 It's a slightly different story in China - the world's largest population has been holding one of the largest basketball competitions in the planet for the past eight years, independently of FIBA or NBA's official participation. The KFC National Junior/Youth (U19) 3-Men Basketball Challenge was launched in 2004 in China, and this year, it has seen participation from nearly 200,000 young players from 500 Chinese cities! The quickfire format of 3x3 basketball is designed to increase participation, and there's no place that has mastered the art of involving it's massive population like China!

I was at hand on Saturday to watch some of the action of the Beijing City Finals of the 2012 version of KFC's national tournament. The tournament was being held at the national training facility of the Chinese Basketball Association (CBA) - who are part of the tournament's organisers - the same facility that is used for China's national teams for practice.

There was a major Jeremy Lin overdose at the event. Lin's visit to China in the summer opened up doors for a plethora of commercial possibilities. Lin is the official brand ambassador of the championship; his banners were draped all around the arena and they were TV commercials on the big screen of Lin (in very bad Chinese) inviting Chinese guys to play 3-on-3 with him.

The great thing is that the tournament is free for kids to register. Their objectives are simple: play basketball and eat KFC. Those last five words also sum up my life.

The one drawback: there is no equivalent competition for girls in the KFC 3x3 Challenge. It's an All-Boys championship nationwide. There could easily be another 200,000 if the scope of the championship is widened to involve girls, too.

Everyone who has plays basketball has played 3x3 basketball. That's a fact. But is the format of the game good enough to be taken seriously, to become an Olympic sport, or even a professional sport? Many suggest that 3x3 is good because it involves participation and also levels the competition a little bit. But it still feels like a less serious version of the game, and it involves and showcases fewer skills than 5-on-5 fullcourt, real basketball. In China, there are hundreds of thousands of youth who already swear by it. Time will tell how popular the organised version of 3x3 can get in the future around the world.

Posted by KARAN MADHOK at 07:59 No comments:

In India, NBA Games will be broadcast only on Sony SIX this season

First, the good news: In a press release yesterday, the NBA announced that they have partnered with Multi Screen Media (MSM) for a multi-year television broadcast deal in India. Continuing over from last year, MSM’s new sports channel Sony SIX will continue to show live NBA games in India all season. There will be a lot more than games actually: SIX will broadcast some original NBA programming, and more interestingly, focus on customised NBA programmes from India itself. This, the NBA says, will help focus on engaging Indian youth by bringing together talent from the NBA, Sony Entertainment, and Bollywood.

Posted by KARAN MADHOK at 16:17 No comments:

The Rockets have suddenly become one of the NBA’s hottest tickets, going from the most unknown to the one of the most interesting squads in the league in the new season. An all it took was a heady cocktail of an unstoppable, underrated, likeable, and beautifully bearded scorer paired up with an exciting and also likeable Asian sensation.

Posted by KARAN MADHOK at 17:57 No comments:

NBA players – in terms of their freakish talent and personalities – are a little like superheroes, too. They are colourful, larger than life, they carry the hopes of millions of fervent supporters, and they can be more-than-capable of some super-stuff every once in a while. Just like the myth of superheroes has drawn them out to be idolised as the perfect human beings, NBA players are idolised as perfect basketball players.

I bring you my list of top 10 superheroes and the NBA players who most match them. Which one of these ‘Superballers’ would you pick to come and save the day (or your favourite team)?

Posted by KARAN MADHOK at 14:00 No comments:

In Jeena PS, a new leader emerges for the future of Indian basketball 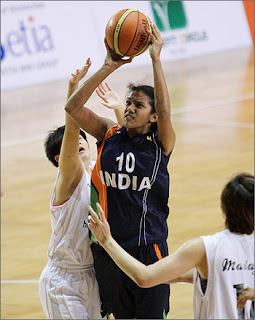 Born in Kalpetta, Wayanad, about a six hour drive up north from Geethu Anna Jose’s hometown of Kotayyam in the same Southern Indian state of Kerala, young Jeena PS looked up to the Keralite heroine as role model. Little did the teenager know that, as she watched Jose go from becoming India’s best to WNBA hopeful, she herself would develop from a basketball newcomer to the nation’s hottest young talent.

Posted by KARAN MADHOK at 13:57 No comments: