Usually, India's best 'club' team gets an opportunity to play in the FIBA Asia Champions Cup, the tournament's biggest international club basketball tournament, bringing together the champions from every country. This time, however, FIBA changed the format to include qualifying rounds to determine the 'final 8' for the FIBA Asia CC. India's Federation Cup champions - Punjab Police - represented the nation in the East Asia qualifiers this week in Bangkok. But a losing record saw them fall outside the top-2 qualifying spots and return home unfulfilled. 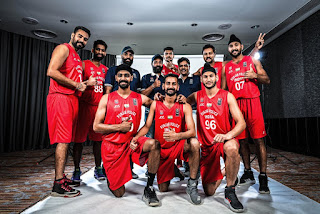 From August 13-15, Punjab Police took part in the 2019 FIBA Asia Champions Cup East Asia Qualifiers in Thailand, alongside SAFSA (Singapore), HiTech Bangkok City (Thailand), and Fubon Braves (Chinese Taipei). The teams played three round-robin games each, and the top two were chosen for the final-8 of the tournament.

Host team HiTech Bangkok City and Fubon Braves assured their place in the FIBA Asia CC after winning their first two games. In their third matchup, against each other, Fubon squeezed past HiTech 77-76 to officially finish on top of the group.

Punjab Police featured an undermanned roster, where several of their top players like Amjyot Singh and Arshpreet Singh Bhullar weren't available because of their participation in season 2 of the 3x3BL in Punjab. They started their tournament with a crushing loss to Fubon, 100-56. Punjab's Rajvir Singh had a game high 23 points, but it wouldn't be enough as he got little support from his teammates. Fubon were led by Weir-Chern Liu (18) in the win. 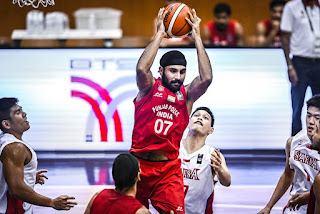 Game 2 was an even weaker performance by Punjab Police, against the hosts, HiTech. Rajvir Singh was again the central force for Punjab, with 26 points on a highly-inefficient 35 shots. For HiTech, Nakorn Jaisanuk scored a team-high 18 to lead his team to a 116-54 win.

Punjab did manage to end matters on a positive note in their final game against Singapore's SAFSA. In a back-and-forth game that went down to the wire, Sukhdeep Dhillon (29) and Ranbir Singh Virdi (19) helped Punjab Police eke out a 81-78 victory. SAFSA were led by Leon Kwek (20) and Delvin Goh (19) in the loss.

With this win, Punjab Police ended the event with a 1-2 record at third place.
Posted by KARAN MADHOK at 10:08