Wonder of Wuhan: India should build on historic win over China to spark a basketball revolution

The last five minutes of India's historic first-ever win over China - perhaps the greatest win in 78 years of India's international basketball history - were played under an eerie hush. The game was talking place at the Wuhan Sports Center in Wuhan, the most populous city in Central China. This was the 5th FIBA Asia Cup, a biennial tournament held between 10 of the top teams on the continent. This is a relatively smaller tournament than the more highly-regarded FIBA Asia Basketball Championship (ABC), and the local Chinese fans only filled up a fraction of the 13,000-seat arena in Wuhan's Zhuankou suburb. 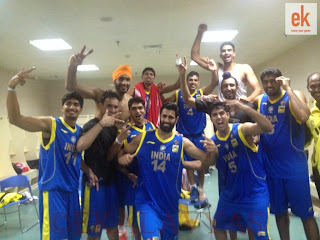 The hosts, favourites to win the tournament after winning their first two games and defeating Asian champions Iran in the process, were confident against India. The fans were out with vuvuzelas, balloon clappers, and there were animated MCs and scantily-clad cheerleaders to boost their spirits. Yet, nothing could divert their horrifically stunned attentions away from the upset on court. As the clock ticket away in the game's final minutes and it seemed that India would achieve the impossible, the arena grew quieter. Each squeak of a shoe sole on the polished wooden floor reverberated across the gymnasium. Each word of encouragement from the Indian bench to the heroes on court could be heard by every fan, media-person, and official in attendance.

And in this silence, India found joy: the team nicknamed the 'Young Cagers' - led by Head Coach Scott Flemming - finally grew up, and announced the coming of age of all of Indian Basketball with a memorable win. All the odds had been stacked against India, who are ranked 61st in the FIBA World Basketball rankings compared to China, who are 12th and are tops in Asia. India had lost their first game against Japan a day ago while China were riding a positive streak behind a talented youth movement. Yet, the final score read 65-58 in India's favour, and a milestone for Indian hoops was achieved.

Expectations, as they always are in such high-level Asian tournaments, were low for India. Always the minnows against other giants of the game, India returned without a win at bottom place in the previous iteration of the FIBA Asia Cup in Tokyo two years ago. In last year's FIBA Asia Championship in the Philippines, India showed some improvement, but were still defeated in blowout fashion against top teams like Iran, Korea, and of course, China, who beat India 79-45, just 11 months ago.

In the world of an Indian basketball follower, low expectations are the norm. We prematurely resign ourselves to embarrassing losses against the Chinas and the Irans of the continent, and hope for the best against teams ranked closer to our stature, like Kazakhstan or Bahrain. Rarely has India's senior men's team won a meaningful game of basketball in the past several decades, a hypnotizing lull of losses upon losses that numbed Indian media and fans into submission to the point of ignorance. China regularly expects to defeat India by 30, 40, or 50 points per contest. Coming into this tournament, India were once again ignored as outsiders with a seventh or eighth place finish (out of 10) as best-case scenario. Apart from the minuscule, almost-irrationally passionate fanbase of Indian basketball, the mainstream continued to not pay the team any attention. 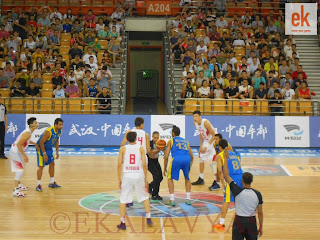 Perhaps this was why, despite qualifying once more for a major Asian FIBA tournament, there were no mainstream media-houses from India covering the event, and the games itself weren't shown on any TV channel back home. China were stumped and India were absent, and, outside of the cheers and hoots from the victorious Indian locker-room, there was nothing but silence.

It was only through the power of the internet live commentary and social media that we were able to get the word out, and once the news leaked, it quickly went viral. Thousands of supporters of the Indian hoops cause were made aware of the news that no other traditional media outlet had covered. The players and the coaches who had made this achievement possible - ironically - couldn't even hear the online applause, finding themselves stuck behind the Great Firewall of China and unable to access the hysteria of Indian fans thousands of miles away.

One of those voices online was of Bobby Sharma, the senior VP of global basketball for IMG Worldwide, the company which, in their partnership with Reliance and the Basketball Federation of India (BFI) is hoping to usher in India's first professional basketball league in coming years. Sharma congratulated the BFI by calling this upset a 'monumental watershed moment'. Indeed, the achievements of those 12 men on court and their coaches in one simple game could be the springboard that India needs to finally take that basketball leap we have long been dreaming of. 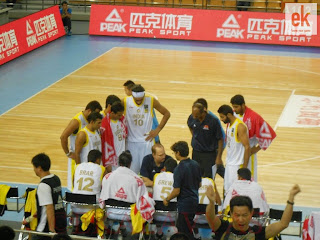 Indian basketball will always remember the day - July 13, 2014 - that they eclipsed the mighty Chinese. This victory is set to change India's attitude and approach looking forward at all our basketball encounters in the future. If this team indeed has the ability to beat China, then it prepare with a realistic mentality of having a shot in every match-up, against any opponent. There are no reasons to throw in the towel before any game, and every Indian team from here on out should look up at Wonder in Wuhan on July 13 and find the motivation to do it again.

Perhaps, more young Indians back home, disillusioned that the game has no future in India, will start believing in the amazing possibilities of sport once again. The achievements of our best players should inspire countless others to remain geared towards a career in basketball, and motivated to recreate and build upon the success of the current squad.

Perhaps, with increased attention from the Indian mainstream after this victory will shine a spotlight on India's national teams and force our media and our sponsors to acknowledge them. Maybe this leads to greater financial rewards for our players, the majority of whom come from poor families and chose basketball as their only way to a stable job.

This win means a lot many of India's individual players, who are on various points in their careers. Vishesh Bhriguvanshi, India's captain and most consistent performer in recent years will relish this game forever. Pratham Singh was India's fourth-quarter hero, and sank several clutch three-pointers to give India the lead for good. Amjyot Singh played fantastically on both ends of the floor and showed elite athleticism against China's 7-foot-1 prodigy Zhou Qi. Yadwinder Singh, India's energy bar, lifted the team with his hustle on the defensive end. Amrit Pal Singh was a farmer at age 19 when he discovered basketball; just four years later, he was controlling the defensive paint against Chinese bigs. The likes of Joginder Singh, Narendar Grewal, Rikin Pethani, and more in the rotation have etched their names in Indian hoops history forever. 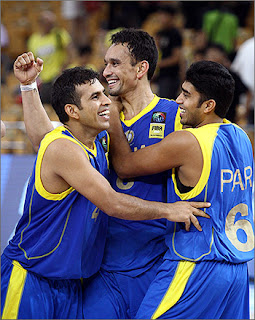 And the man who should be celebrated with special plaudits after this historical night is Head Coach Scott Flemming. After 32 years of coaching experience in the USA, most recently with the NBDL side Texas Legends, Flemming chose a different challenge, coming to India to try and make a difference in a country on the basketball hinterlands. Two years after his appointment, he isn't only the longest-serving foreign coach in India, he is also one of the most successful. Flemming led India to a gold medal victory at the Lusofonia Games this January and a first place finish at the South Asian Basketball Championship. But this was, by far, his biggest win with India.

The FIBA Asia Cup is still in process. India play their third and fourth Preliminary Round games against Indonesia and Iran on Monday and Tuesday respectively. They've almost ensured qualification for the Quarter-Final stage. Coach Flemming has spoken optimistically of India's ability to continue performing basketball miracles.

For now, this victory is a wake-up call for Indian basketball to start believing in its potential. We beat China on the court yesterday, but China basketball are miles ahead in the longer marathon. Our best basketball facility is only as good as 50-60 of what Chinese Tier 2 or Tier 3 cities possess. China's young talents are trained and developed from a young age to maximize their potential. All of the players in China's national team are professionals in the well-established Chinese Basketball Association (CBA). They have developed NBA talent in the past and have the resources to develop more such talent in the future. They have much better coaching down to the grassroots level and have much more money to pump into their various basketball federations. India, meanwhile, have an unbalanced and mostly disorganized grassroots nursing system, don't have the infrastructure to provide our top talents and don't have enough support from the common public that rarely looks beyond cricket (or the FIFA World Cup) when the word 'sport' is uttered. Worst of all, internal politics stunts any real growth and there is rarely any motivations from those who are in the basketball fraternity to rise higher, as many stay content to swivel around in lower mediocrity.

And yet, if India can beat China despite being completely overshadowed across every sphere in the basketball world, imagine what we could do if we actually put in an honest effort to improve hoops in the country, from the grassroots to the top, instead of making the sport into just another way for bureaucrats to enjoy a small morsel of power?

Team India's moment - this Wonder of Wuhan - was a silent revolution indeed; but let's hope that the reaction to this moment is loud, energetic, and points to a brighter future for Indian basketball.

UPDATE: Thanks to FIBA, now we have the entire game tape of India's historic win over China on YouTube. Check it out here: