It's official: Sacramento Kings sign Sim Bhullar to a contract & make him the NBA's first desi ever!


And now, officially, a player of Indian-descent has become a part of the NBA family. If you've been following the desi-hoops noises in recent years, you wouldn't be surprised to hear that this player is the 7-foot-5 Canadian giant Sim Bhullar. And of course, it wouldn't surprise you that the team which picked him is the Sacramento Kings, the first and only NBA franchise whose majority owner is an Indian. 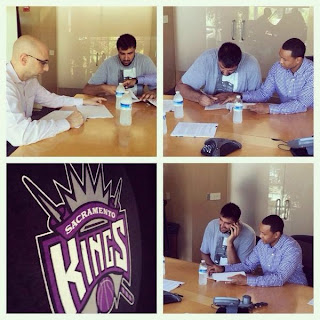 As India awoke to celebrate Independence Day on August 15th, thousands of miles away in a different time zone, Bhullar - born to parents that immigrated from Punjab, India to Toronto, Canada several decades ago - announced via his own Twitter account that the Kings had signed him to his first NBA contract. Further details of the contract haven't yet been announced, but the rookie minimum this year is $507,366, and it can be assumed that it's a non-guaranteed deal to participate in training camp with the Kings from October.

Bhullar, who played the last two years for New Mexico State University (NMSU) and won the Western Athletic Conference (WAC) tournament MVP honours in both years declared for the 2014 NBA draft earlier this summer, but wasn't picked by any NBA team on draft night. Only a few days later though, the Sacramento Kings signed Bhullar to join their Summer League roster for Las Vegas, with hopes that the giant Center could earn a potential roster spot.

He didn't exactly make waves at Vegas, but he wasn't given much of an opportunity to make even a tiny ripple. Bhullar only hit the floor in four games at the Summer League for the Kings, playing just about two and a half minutes per game. He only attempted and scored one basket (so, that's a 100 percent from the field!) and grabbed just two rebounds in a total of 10 minutes of action through the entire tournament. 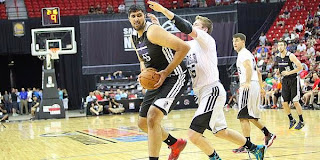 Meanwhile, the Kings did pretty well at the Summer League without much help from Bhullar, as they won the tournament with a final triumph over the Houston Rockets.

Despite his near-absence from meaningful Summer League action, the Kings chose to sign Bhullar, officially making him an NBA player. Bhullar will now attend training camp and will have a chance to prove that he can be a part of the roster on Opening Night of the 2014-15 season.

Despite the odds against him, the big man's chances are looking good. At this point, the only other listed Centers for the Kings are DeMarcus Cousins (aka Boogie Smooth, the people's champ, who needs to be an All Star this season) and Aaron Gray, who was traded to the Kings last December but only played around 10 minutes a game in Sacramento last season. Cousins is the literally and figuratively the centerpiece of this franchise, but if Bhullar can prove his worth to Coach Mike Malone, he may be able to earn some spot as Cousins' backup Center. 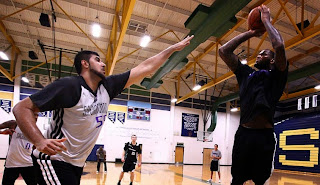 In all likelihood, Bhullar will make the team but probably not play too often. Despite his dominant years in college, he may have a much tougher time keeping pace with the speed of the NBA. That said, Bhullar has indeed gotten in much better shape and lost a lot of weight over the summer, and we hope that the hard work that he has put in to improve both his game and his conditioning can reap him some rewards.

Of course, all of this smells like a marketing ploy hatched by the Kings and their Indian-born owner Vivek Ranadive. In just over a year as the new owner of the team, Ranadive has shown great creativity in promoting the team to their existing and potentially new fans. It is all too well known by now that the billion-plus population of India is basketball's most exciting (relatively) untouched market, and many are hoping to capitalize on that potential fanbase. Ranadive's Kings have of course taken the lead in this matter, Over the past year, Ranadive’s Kings have hosted Indian-culture nights, launched the NBA’s only Hindi-language website, and much more. When Bhullar was added to the Summer League roster, the Kings even announced him as 'Indian' under the 'Nationality' column of the team-list, which had to be corrected after a few of us complained on Twitter.

So yes, Bhullar's official signing to the Kings will continue to the trend of popularizing the Kings (and thus, the rest of the NBA) to India. Bhullar's jersey sales won't exactly skyrocket - since most Indians are still new to the NBA - but there should be a noteworthy bump for sure. Hell, I might go buy one, too. Here's a guy who seems to love Butter Chicken almost as much as I do AND he could play backup minutes to Boogie Cousins? That's a no-brainer. 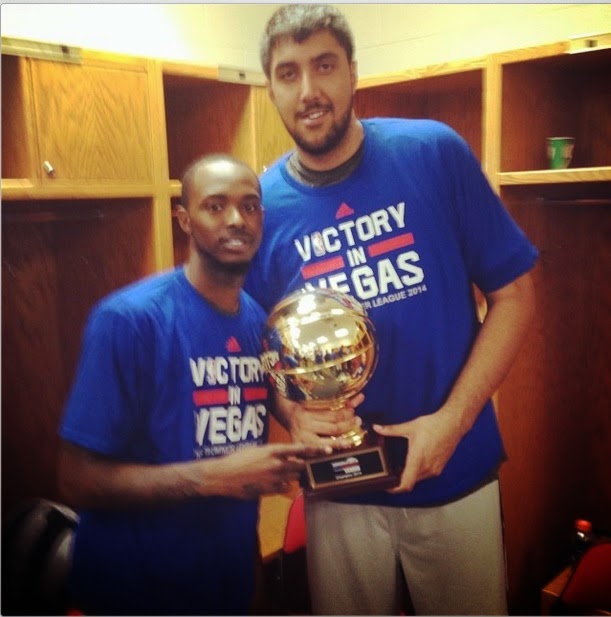 But the big question for the big man now is, can he prove that he's more than just a marketing tool? Bhullar has made desi ballers around the world extremely proud, and now, the next step is to silence all the doubt and the hate by proving that he really does belong in the NBA. The Kings could sure use strong contribution from a talented young big man who can be a beast on defense, a soft touch around the basket, and a wingspan to strike fear in all opponents. He has improved dramatically over the past two years, and hopefully he keeps improving to have a more well-rounded game for the upcoming NBA season.

“I’ve long believed that India is the next great frontier for the NBA, and adding a talented player like Sim only underscores the exponential growth basketball has experienced in that nation,” said Ranadivé. “While Sim is the first player of Indian descent to sign with an NBA franchise, he represents one of many that will emerge from that region as the game continues to garner more attention and generate ever-increasing passion among a new generation of Indian fans.”