For NBA teams, India was January’s Flavour of the Month


This feature was originally published in my column for Ekalavyas.com on February 6, 2016. You can find the original article here. 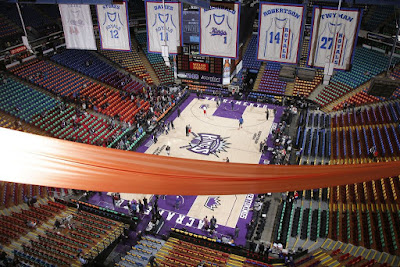 As of a 2013 census, persons of Indian origin make up just about one percent of the entire US population. But even though their percentage is small, there are still over 3.1 million Indian Americans. More crucially, despite being a small fraction of the overall population, Indians have managed to make their influence count: from taking a deeper role in developing their culture and expertise in North America, to evoking the foundation of their roots back in India. Now, that culture is spreading to the National Basketball Association (NBA).

The NBA has long been a progressive basketball league, accepting people of different cultures, races, nationalities, sexual preferences, and genders into their extended family. For years, various NBA teams, and the league itself, has held fan outreach or heritage nights to specific target fanbases, like the Noche Latina or Chinese New Year celebrations.

With little influence around the league in the past, however, it took some time for Indians to join the party. But over the last few years, that party is finally here, and Indian heritage is starting to be celebrated with more fervour in the NBA than ever before.

In January 2016, three NBA teams continued their tradition of hosting India-related heritage nights during home games: the Sacramento Kings, the Philadelphia 76ers, and the Orlando Magic. In the larger scheme of NBA events, the impact of these themed-nights was small. But to the Indian diaspora in the US and the rapidly rising NBA-watching audience in India, the ‘India Nights’ were another nod by the NBA of its growing interest in Indians, both home and abroad.

Most ‘India Nights’ around the NBA follow similar themes, themes that often overplay Indian stereotypes and caricatures around the world. You want dancing? Get some cheerleaders in saris and play ‘Jai Ho!’ You want snacks? Nothing better than kebabs and curries in the concession stands. India is synonymous with colour to the West, and often, NBA arenas get decorated in a wonderful myriad to challenge a Holi celebration. Special T-shirts and memorabilia are worn by players or passed out to fans. Words like ‘Bollywood’, ‘desi’, ‘flavour’ and ‘colour’ are thrown about a lot. Indian or Indian-origin celebrities are honoured, and Indian or Indian-origin singers and dancers perform for the fans.

With every year, the spectacle is gaining more momentum, and the rise of competing ‘India Nights’ is adding that ‘flavour’ across the NBA.

Vivek Ranadive is the first Indian-born majority-owner of an NBA team, but before he made history by owning the Sacramento Kings, Ranadive briefly held a minority stake with the Golden State Warriors. Under Ranadive’s vice-chairmanship, the Warriors began a tradition of holding ‘Bollywood Night’ at their games. From the very first time in 2011, the Warriors introduced the epic ‘got Curry?’ T-shirts in honour of their young point guard Stephen Curry. Four years later, Ranadive had jumped shipped to head out to Sacramento, the Warriors had become the NBA best team, and Curry the league’s best player. But Bollywood Nights have continued in the Bay Area, and this year’s event is scheduled to be held on March 9 when the Warriors host the Utah Jazz.

When Ranadive came to Sacramento with dreams of NBA 3.0 and of making the Kings ‘India’s team’, he brought ‘Bollywood Night’ over with him. Over the last few years, this event in Sacramento has grown from strength to strength. The Kings’ players wear practice T-shirts with Devanagari script, the Sleep Train Arena gets decorated in style, Indian cuisine is on offer, and fans enjoy song-and-dance routines by Indian artists. Ranadive’s daughter Anjali, an aspiring pop-star, has also become a regular feature for halftime performances on Bollywood Nights.

When the 2016 Bollywood Night was held on January 7th, it also featured Indian-origin Miss America Nina Davulari, an announcement of the Kings’ players in Hindi, and a scintillating introduction video to reach out to fans from Mumbai to Sacramento. The Kings Dancers also dressed up in Indian garb on the night, as was Slamson the Lion, the Kings’ official mascot. Other events included Punjabi sword fighting and dance performances by the California-based Ankhiley Gabroo dance group. Sacramento native and artist Pam Shankar, of Indo-Fijian descent, sang the pre-game national anthem. The home team played the Los Angeles Lakers that night in Kobe Bryant’s last game in Sacramento and eked out a close win.

A few weeks later, Philadelphia scratched their Indian itch, too. On January 18th, the 76ers held their second annual Indian-American Heritage Night. Before the game, the Indian community and the 76ers honoured Indian Americans in Sports at the Wells Fargo Center, notably, Kevin Negandhi, an anchor for ESPN SportsCenter in the USA and Crossover Basketball and Scholars Academy, a non-profit who have been coming to Chennai for several years to promote education and values through basketball among children from lower-economic households. The event featured Bollywood music bumping outside the entrances to the court, cultural exhibits around the arena, special Indian themed 76ers T-shirts provided to the guests, and a performance by Philadelphia-based dance company Aatma. The 76ers played their best game of the season to blow out the Portland Trail Blazers.

Not to be outdone, the Orlando Magic – title holders of the Best Heritage Night in the NBA for the past two years – brought back ‘India Day’ (as declared by Orlando Mayor Buddy Dyer) to Downtown Orlando on January 31st, in an event organized by the Indian American Chamber of Commerce (IACC). The IACC hosted Bollywood superstar Madhuri Dixit this year. A Cultural Street Fest was held pregame in front of the Amway Center, showcasing Indian dancing from various local Indian organizations. Guests enjoyed henna tattoos, sari wrapping, turban tying, free t-shirts and more. Halftime entertainment was provided by the Bollywood Dance Academy. The Orlando Magic snapped eight-game losing streak at the game with a 119-114 win over the Boston Celtics.

All of the events above have been covered by local South Asian-centric media, making more and more members of the Indian community aware of the NBA and of the league’s clout. Furthermore, the average NBA fan at these games is finding awareness about Indian culture: it may be just a Western, ‘whitewashed’ view of India, but it’s a start.

The growing attention to India and Indians has come at a strategic time for the NBA teams; the NBA office in India continues to grow its list of both grassroots and mainstream events around the country. More Indian fans are watching live NBA games on TV than ever before, and the future promises wider availability of NBA merchandise in big Indian cities.

Meanwhile, a couple of giant Indian men are becoming role models for South Asians in the US. Last year, Ranadive’s Kings made Canadian Sim Bhullar the first person of Indian-origin to play in the NBA. A few months later, the Dallas Mavericks drafted Satnam Singh, making him the first Indian national to be drafted into the league. Both the seven-footed giants are currently playing in the D-League – Raptors 905 and Texas Legends respectively – and are on the periphery of a potential NBA call-up. Their presence would add a little more of that much-clichéd desi flavour to the NBA.

It’s a win-win relationship for NBA teams to invest in their heritage ‘India Nights’, but the biggest reason to do so may be far simpler: about winning on the basketball court itself. All three NBA teams that held Indian heritage nights in January held a losing record and were outside the playoff race. And yet, all three teams picked up exciting or impressive wins that night. Coincidence, or is evoking India bringing NBA host teams a dose of good luck on their kundlis?

And speaking of good kundlis, you know which NBA team has the brightest fortune of them all? Which team is currently the reigning NBA champion, are leading the league standings after a historically good start, are on pace to have the greatest regular season of All Time, are favourites to repeat as champions, feature the league MVP, and have become the greatest show in basketball? It’s the Golden State Warriors, the team who got properly on the Bollywood bandwagon before anyone else.