Going back to the 2014-15 season, the Philadelphia 76ers' confounding 'process' has handed them one of the worst stretches in NBA history. Philly won 18 games last season, and have amassed just five wins so far in 2015-16, to give themselves a combined record of 23-119 (19 percent) in the past 15 months. 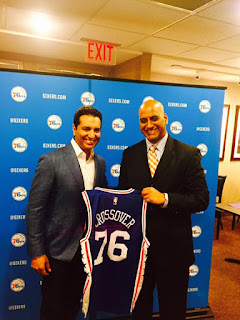 Fortunately, however, the 76ers have found their one, random lucky charm: the Indian community.

For the second consecutive season, the Philadelphia 76ers hosted Indian American Heritage Night at the Wells Fargo Center in Philadelphia, and for the second consecutive season, they came out with a victory. On Saturday, January 16, the 76ers blew out the Portland Trail Blazers 114-89 for the best win of their season and improve to 2/2 (100 percent) on Indian nights. Must be something in those pregame samosas.

Before the game, the Indian community and 76ers PR honoured Indian Americans in sports at the Hall of Fame room at the Wells Fargo Center. Notably, Kevin Negandhi, an anchor for ESPN SportsCenter in the USA and Crossover Basketball and Scholars Academy, a non-profit who have been coming to Chennai for several years to promote education and values through basketball among children from lower-economic households. Crossover were represented by their Founder, Shaun Jayachandran, and Shilpa Tumalla of Harvard, the only Indian-origin women player playing in the NCAA Division 1. Both Negandhi and Team Crossover were felicitated mid-court at the game on Saturday.

I was fortunate enough to be invited to this year's Indian American Heritage Night, and made my first trip to Philadelphia for this memorable event. The event featured Bollywood music bumping outside the entrances to the court, cultural exhibits around the arena, special Indian themed 76ers T-shirts provided to the guests, and a performances by Philadelphia-based dance company Aatma. Other dignitaries like Raj Mukherjee, Pryia Roy, NBA Senior Director of Basketball Operations-International Troy Justice, Krossover founder Vasu Kulkarni, and more were present to celebrate Indian American heritage.

Back to the basketball, however: the 76ers started hot, and stayed hot, making the most of Portland's second night of a road back-to-back. Jahlil Okafor, the rookie poster-boy of the struggling team, dominated with 25 points and 10 rebounds in the win. A total of five Philly players scored in double digits and the 76ers now boast of a perfect record with me in attendance (1/1).
Posted by KARAN MADHOK at 04:45