As the influence and numbers of the Indian diaspora over in North America grows, so has the appreciation grown for the community as a fanbase by the NBA. Over the last few years, the Golden State Warriors, the Sacramento Kings (both due to the influence of Vivek Ranadive) and the Orlando Magic have held regular Bollywood or India themed nights at certain regular season games. This weekend, the Philadelphia 76ers will be getting a slice (or a tukra) of the action. 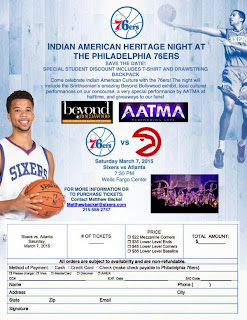 Main Line Indian Association (MLIA) - nonprofit cultural organization whose mission is to share Indian culture in Philadelphia & the western suburbs - announced yesterday that the 76ers will be hosting an Indian American Heritage Night on March 7 in a regular-season game against the Hawks. According to the flyer, a Smithsonian exhibition 'Beyond Bollywood: Indian Americans Shaping the Nation' and a halftime performance by award-winning dance group 'Aatma'. The special night is being held just a day after the Indian festival of Holi.

Another bit of good news is that our friends from Crossover Basketball and Scholar's Academy - who have been holding annual 'Hoops Creating Hope' programme in Chennai for several years - have also been invited to attend the event/game at the Wells Fargo Center in Philadelphia.

Unfortunately, no amount of good Indian karma or jadoo mantar is likely going to save the 76ers on court in this one. Philadelphia (13-47) vs. Atlanta (48-12) is going to be a battle between the second-worst and the best in the Eastern Conference. And I use the term 'battle' loosely because it will probably be a slaughter of Mahabharat-esque scales. 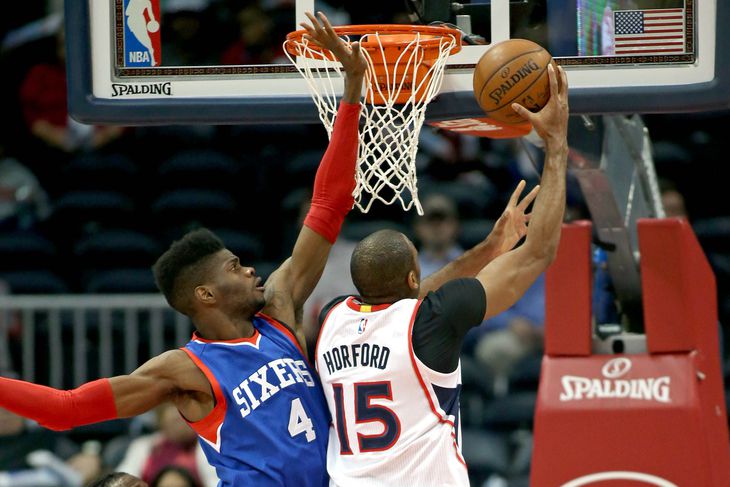 Meanwhile, the person who designed the invitation/flyer above (probably planned months ago) should've checked NBA news a little before releasing it this week. Reigning rookie of the year Michael Carter-Williams, alas, is now a Milwaukee Buck, as the tanktastic 76ers continued to clear out their roster to ensure that as little winning can be done this season as possible. On the flyer designer's defense though, it still makes more sense to have an image of Carter-Williams than 48 future draft picks.

Anyways, it's great to see another NBA team celebrating Indian culture and Indian people in their community. With Indian-born owner Vivek Ranadive hovering over matters out in Sacramento, the influence of desi-ness in the league is bound to keep increasing.
Posted by KARAN MADHOK at 15:27