Before Vivek Ranadive became the first Indian-born person to have majority ownership of an NBA team with the Sacramento Kings, he was the first Indian to be a minority owner, with the Golden State Warriors. Ranadive's impact for the Warriors was relatively little, but he did introduce the first iterations of 'Bollywood Night', where the team celebrated Ranadive's Indian culture through music, food, and other events during one home game every season. 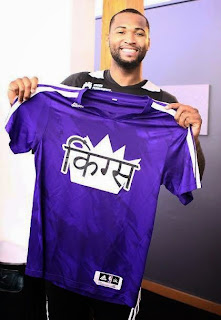 Now that Ranadive has taken control of the Kings and reached out to the Indian community near and far more than ever, it was only a matter of time before the 'Bollywood Night' fever hit Sacramento as well.

In their home game against the Lakers on Wednesday, April 2nd, the Kings' Sleep Train Arena will host their first-ever Bollywood Night. According to an official release from the team, this Kings-Lakers game will also celebrate Indian culture and cinema with various performances. The game will also be broadcast live in India on the morning of April 3rd from 7:30 AM.

All attendees to the game in Sacramento will be given commemorative 'Bollywood Night' shirts in various colours. Most exciting of all, the Kings' players will be wearing warm-up shirts with the words 'Kings' inscribed in Hindi - किंग्स - (I WANT ONE!!!!). At halftime, Anjali Ranadive - the daughter of Vivek - will give a pop/Bollywood fusion performance. Other dance performances will include UC Davis student groups LashKara, Sunatya, and the Kings' cheerleaders in Indian garb.

"The ultimate power of sports is the ability to connect people across geographic, economic and cultural lines," said Ranadivé. "The Kings strive every day to provide all of our fans with a unique and lasting experience, which is why we have such strong support from the Indian community here and abroad. Together, we are catapulting basketball as the fastest growing sport in India. NBA Commissioner Adam Silver and I also have plans to visit, and we hope to continue sharing the Kings experience throughout India."

These are exciting times to be an Indian NBA fan. With Ranadive at the helm of an NBA franchise, the attention has clearly been shifted to further interaction and involvement of India and Indian culture into the NBA. Ranadive has been hailed as one of the saviour for the Kings in Sacramento; now, his ambitions are to be the man who helps create a market for the game of basketball in India.

As for the Kings' fortunes on court... Well, let's just say that there is always next season. The Lakers-Kings game may be sprinkled with a lot of Indian masala on Bollywood Night, but take a look at their respective records and you find two teams that have only one a combined 51 games this season. The good news it that, with the personalities in Sacramento (the only and only BOOGIE!) and the up-tempo game at the Lakers play, we can be assured that, even though the final result will matter little except in determining lottery chances, the game will be far from boring.

And if the Kings are able to continue their off-court hot streak and the lottery favours them, the injection of a young talent next season might finally see them match their hype towards the Indian fan with real success and results.