Addicted to the Game: Vishesh Bhriguvanshi 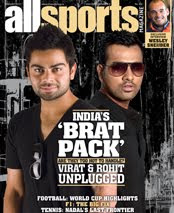 An edited version of this article was first published in the August 2010 edition of All Sports Magazine. Here is the full version.

Two years ago, I walked into Vishesh Bhriguvanshi’s room for the first time. The experience was surreal on at least four levels.

Surreal because this room belonged to a 17-year-old boy who just might be the biggest prospect in Indian basketball. Surreal because the little room, with its creaky sofa/bed and flaky wall paint and dozens of LeBron James and Allen Iverson posters was as much the family’s living room (read: guest hospitality/chai offering area) as it was this 17-year-old’s bedroom. Surreal because, despite his accomplishments, Vishesh was a relative nobody, destined to a life of relative-nobodiness.

But very soon, it might just be the right time to start caring: Somewhere deafened behind the loud noises of the World Cup vuvezelas and the news/updates/criticisms from the CommonWealth Games and MS Dhoni’s “secret” wedding was a bit of sport news sure to get every basketball fan in India jumping and dunking in delight. To change the face of sports in the India, American sports management powerhouse IMG aligned with Reliance, which stands amongst the richest corporations in the world. One of their first moves? The announcement to delve into a 30-year-long deal with the Basketball Federation of India (BFI). IMG-Reliance will assist to improve basketball facilities, provide training to young talent, and most importantly, help set up a professional basketball league in India, akin to the IPL or the National Basketball Association (NBA) from the US. It may take a few more years, but with fanfare sure to follow the growth of the sport in India, young talents in the country now have an opportunity to become the stars of the game in the future.

Vishesh, unsurprisingly, is looking forward to it. 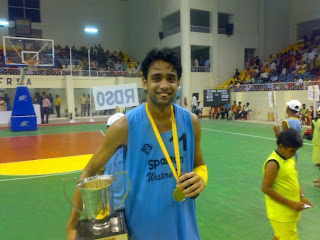 Let’s go back two years again: Vishesh, which means unique or special, surely lived up to his name in the early days of 2008, when the NBA, surely the holy grail of all-that-is-great-and-importance-and-where-amazing-happens-etc of basketball, organised a Basketball Without Borders (BWB) – Asia camp in New Delhi. The camp featured over 40 of the most talented under-18s from dozens of countries around Asia and Oceania. Vishesh walked in as one of them, and he walked out after a few days as the Most Valuable Player of the camp’s ‘All Star Game’.

“I just kept working hard,” he had told me then, “Just kept playing and playing. 6-7 hours every day, I just love being on the court.”

It’s been more than two years since. I can still taste the chai and Marie biscuits that I was offered by his parents in that room and I can still remember those LeBron James posters.

LeBron was in a Cleveland Cavaliers #23 jersey then, but will be donning a Miami Heat #6 come next season. Vishesh has changed too, grown, yet somehow, remained the same. He went from being budding young star to national team captain in less than two years, leading the Indian national Men’s team, who are dubbed the ‘Young Cagers’ into the South Asian Games at Dhaka. But he is still the same in the manner with which he talks of his love for NBA basketball, hoping to copy their flashy plays, hoping to dunk on someone and ‘posterise’ them just like LeBron does. His game has changed, as he has evolved further and further into becoming an all-rounded player, and he has added to his CV back-to-back national championships with the Western Railways. But his work ethic is still the same, the same humble young man, the same kid who just wants to get on the court and satisfy his addiction for the game. Just keep playing basketball, all day.

Vishesh deflects every question I ask him about his extraordinary ability on the basketball court, and when I keep probing, he answers with a clichéd, “Just keep working hard” answer. He has said it so often in the past few years that I’m starting to believe the cliché. And he isn’t alone: everyone from the BFI secretary Harish Sharma to renowned American coaches who worked with the national team have had the same, clichéd-but-true words for the youngster: “hunger to learn”, “always wanting to get better”, “always working harder”. 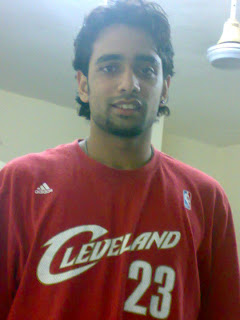 Why do you work so hard? I ask him the most obvious, why-not? question of the day. “Basketball is my life,” he answers, “I still practice all the time, whenever I get time… 6-7 hours a day. The game has given me so much: a job, popularity, and gotten me all the way to the national team. I just respect the game, so I keep on practicing.”

Much further beyond the picturesque ghat and Ganga scenes in the Coffee Table books and the ringing of a thousand temple bells lies the real Varanasi – the Varanasi of nerdy university students, shady office buildings, lazy rickshaw-wallahs, broken roads, and awful traffic.

Probe even further into the holy city and you will find a city that passionately bleeds basketball. Over the past few decades, Varanasi has regularly churned out legends of the game on the national and the international level. The Indian Women’s team has been blessed by the talents of the four ‘Singh Sisters of Varanasi’ – Divya, Prashanti, Akanksha, and Pratima – who have been dominating the game for the better part of this past decade. Many national level players from the city have learnt their trade at the basketball courts of the Udai Pratap (UP) College, which has gained a reputation for becoming a factory for producing Indian hoop stars.

Vishesh is from those same courts. His father was a Biology teacher at the UP College, and when he was around 11, Vishesh started to discover the game for himself. As he grew up, his biggest role model was another Varanasi boy, Trideep Rai, whose incredible talent had made him into a regular fixture in the Indian starting squads and propelled him to captaining the side in several crucial tournaments. “Trideep Bhaiya,” Vishesh says affectionately, “He was the one that brought the game closer to me and so many others. He had a lot of experience and helped us practice hard, helped us play the right way.”

And soon came the national camp invitations, the championships, the selection. Sub-Junior. Junior. And after the BWB experience, Senior. Vishesh was the youngest player in the Young Cagers side that went to play in Kuwait in 2008, his first national team experience. “I didn’t get to play much,” he remembers, “But it was still a chance to have fun with the team, learn and improve my game.” 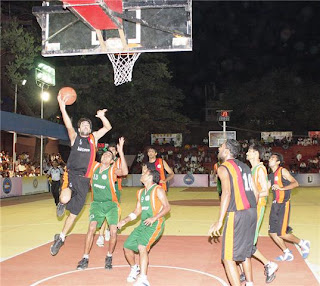 Like most other young sportsmen in India, one of the Vishesh’s first major hurdles started from home. “When I was younger and playing and improving, my family told me to focus on studies, ‘Basketball should be a hobby’, they said, But when I made it into the Indian team, and when I got a job with the government even before I turned 17, they started to believe that I had a future here and they encouraged me.”

It has already been a wild ride for the youngster who, unbelievably, is still in his last days as a teenager. He has won two National Championships with Western Railways. “We were an extraordinary team this year,” he speaks of his Railways squad, “It was a team of young players who were struggling before, but were able to improve slowly and find form at the right time.”

And the clichés continued – talking about team before self, refusing to highlight his own strengths.

He had done the same thing two years ago, so the only way for me to discover his skill-set was to watch him play. After the tea and biscuits, Vishesh and I headed out to the UP College court, where I decided to test his competitive spirit (and of course, my own) when I challenged him to a game. One on one, first to five points, uber-competitive journalist versus the country’s most talented youngster. Vishesh laughed, but when I insisted, he agreed.

I scored the first two points, leaving only a bemused smile on Vishesh’s face and an unblinking focus on mine. And suddenly, the pace of the game changed. Vishesh switched on his incredibly swift first step, beating me ragged for four straight points in a matter of seconds. Lay-ups, jump shots, rebounding and tipping in his own misses.

“He has a world of talent and is an unbelievably gifted player,” said Harish Sharma, the BFI secretary, “He has a great quality to control the ball, quick execution, and then finishing well around the basket.” 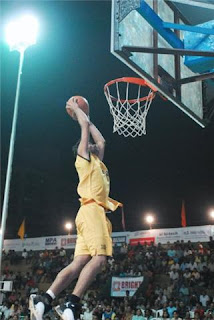 I could’ve done with this scouting report before, because Vishesh did all of the above, and more. I did manage one more jump-shot, but the game was over as quickly as it began. Another move from the top of the key, near the three-point line – fake shot, cross-over dribble, a blur passed by my left, three large strides to the basket, lay-up, game over.

“If he keeps focused off the court, and stays disciplined on it, he has a lot of potential,” Sharma had added, “He has the potential to make to the lower leagues in the USA, maybe even the NBA’s Development League (NBDL).”

Sharma believes that he has the god-given talents and the perfect physical ability to dominate the game. Vishesh is still nit-picky, pointing out how his jump-shot can be improved, and how he can hustle harder, how he can be better.

He will need to be, too. A basketball league in India is not far away, and Vishesh, along with thousands of other basketball players and fans are anxiously awaiting its development. “This is amazing news,” says Vishesh, “And if not the current crop of stars, then at least the future basketball players will be able to have a league of their own. We’ll be able to have top-level matches and involve players from different countries, which in turn will improve our own game.”

“A league like this will help in selling basketball to youngsters as media interest and broadcast coverage increases as well.”

Vishesh is still young, and if the dream of such is league is implemented as planned, he is on his way to becoming one of its stars. There are many others like him in the country, other young basketball players hungry to make their hobby into work, hungry to keep playing this addictive sport. They come from all over the country, from Varanasi to Bhopal to Indore to Chennai and Bangalore and Pune and New Delhi, Ludhiana, Kapurthala, Hyderabad, Ahmadabad, and Mumbai. They have made something out of a sport that has been nothing in this country, and are on their way to having their skills noticed by a national audience.

And yet, what remains surreal is how Vishesh, like many of these other young boys and girls, loves to remain home. He loves his little living room and the LeBron posters and the labyrinthic Banarasi gullies and the UP college court.

“I am never more comfortable than when I’m playing basketball back in Varanasi, back with my friends and my family,” he says, and when I ask him the secret behind the town’s basketball pedigree, he answers: “There’s no secret! It’s just a good atmosphere to practice and play. We don’t do anything else but work hard, because it’s fun.”

Welcome to Vishesh’s world, a world soon to be exploding with a lot more fun and a lot more noise. Welcome to the surreal world of Indian basketball.
Posted by KARAN MADHOK at 13:47